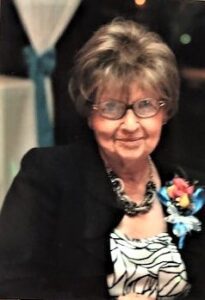 In 1959, Evelyn, her husband, Daniel, and their three children made their home in St. Hedwig, Texas, where she resided until 2016. Following a stroke suffered in 2016, she lived out the rest of her life as a resident of Regent Care Center-Oakwell Farms in San Antonio.

Widowed at a young age, Evelyn assumed many new roles, including ranching, maintaining full-time employment at Colonial Bakery, and most importantly, taking on the responsibility of being both mother and father to her three children. She will be remembered by her family and friends as being a loving, caring woman, who was always willing to help others.

She was preceded in death by her husband, Daniel S. Pollok; her daughter, Sharon Pollok Gauntner; her parents; and numerous brothers and sisters.

The family would like to extend special recognition and abundant thanks to their adopted family at Regent Care Center-Oakwell Farms, especially to Carolyn Green, Darleen Carter, Ray Alacron, and Idalmis Zayas, for their tireless and compassionate care of their mother in her final years.

A funeral Mass was held on Wednesday at 10 a.m. in Annunciation of the Blessed Virgin Mary Catholic Church in St. Hedwig.

Internment followed in the Annunciation of the Blessed Virgin Mary Catholic Cemetery in St. Hedwig.