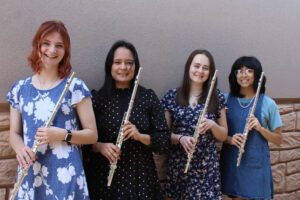 WANDA LINDSEY
La Vernia High School flute quartet (from left) Courtenay Higginbotham, Luz Hernandez, Jodie LeStourgeon, and Kelly Lopez are preparing to compete in the Texas State Solo and Ensemble Contest at the end of May, after earning a Division I “Superior” rating in competition earlier this year. The four are students of the Wanda Lindsey Flute Studio.

A flute quartet from La Vernia High School will compete at the Texas State Solo and Ensemble Contest during the Memorial Day weekend in late May.

Quartet members Kelly Lopez and Courtenay Higginbotham, both seniors; and juniors Jodie LeStourgen and Luz Hernandez all qualified for the State contest by competing at their local UIL Solo and Ensemble contest earlier in the year. The quartet played “Scherzo Brilliante” by Arthur Severn, a Class I, and received a Division I rating (Superior), which enabled them to compete at the State level.

The four are students of Wanda Lindsey’s Flute Studio.

“I am extremely proud of these talented flutists and count myself lucky to have been their teacher,” Lindsey said. “We are looking forward to competing at the highest level in May.”