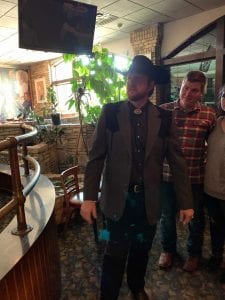 Actor Nathan Gershon, a reserve officer with the La Vernia Police Department, is co-starring in a horror film, “Evil for Dinner,” currently shooting in the Austin area.

We’re accustomed to seeing officers with the La Vernia Police Department cruising around town in their role as protectors.

But you may see two members of the department in completely different roles in the future — on the big screen!

Actor Nathan Gershon is filming “Evil for Dinner” in and around Austin. The reserve officer with the La Vernia department is costarring in the horror film. He invited members of the La Vernia department to be extras in the film. Officer Hank Fahnert and Hank’s fiancée, Havanah Unruh, joined him on-set as extras on the first day of filming in San Antonio.

“Other officers wanted to come, but work and other commitments prevented it,” Gershon said.

He has been with the La Vernia Police Department for about nine years, both full-time and as a reserve.

Hank works full-time for the department. Both were hired by Chief Bobby Hyatt before he retired.

This is Nathan’s third costarring role. He previously appeared in “Life Insurance Lottery,” “The Torturer,” “Meathook Massacre: The Final Chapter,” and sci-fi thriller “Robowoman.” He’s also currently working on an upcoming Amazon TV show in which he has a small role.

“Evil for Dinner,” Gershon said, is a tale of a dysfunctional family of two brothers. He plays “Pierce.”

Gershon’s character, a cult leader, comes into town to settle a centuries-old grudge with his brother, who’s wrangling for power, and clashes result.

Fahnert, as an extra, portrays a patron in a restaurant and later in a bar, with his fiancée.

What did he think of the experience? 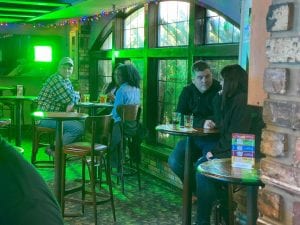 “It was a lot of hurry up and wait,” he said. “There’s lots of people doing stuff but, as an extra or an actor, unless it’s your scene, you are sitting around a lot.”

Will he be heading off to the bright lights of Hollywood?

“Havanah and I had a lot of fun, but we can tell that it’s not our cup of tea and I won’t soon be turning in my gun for a prop gun!” he said.

Gershon, who holds a master’s degree from Harvard University and is a public information officer with the Commemorative Air Force, appreciates the support of his fellow officers while he pursues his acting career.

“The LVPD, the city of La Vernia, and Chief [Bruce] Ritchey have been very supportive of my acting,” he said.

Although he’s appeared in a number of roles, his screen time hasn’t impeded Gershon’s role in protecting and serving the La Vernia community.

“No one has recognized me yet when I have pulled them over on a traffic stop,” the actor reflected ruefully.

‘Evil for Dinner’
The horror film is being filmed, for the most part, around Austin. In addition to co-stars Nathan Gershon and Kerry O’Quinn, it also stars the legendary Lloyd Kaufman and is directed by Travis Youngquist. It’s set for an end-of-year release.