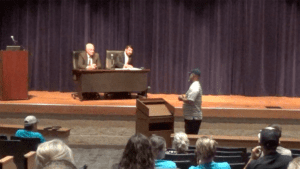 He was among a number of community members who shared concerns and comments June 8, at a town-hall meeting about school safety in the La Vernia Independent School District (ISD).

Superintendent Hensley Cone’s aim was to share an overview of the district’s safety and security programs currently in place, as well as gather input from district families on school safety.

After Dr. Mike Duffek, district director of safety and security, outlined the various programs La Vernia ISD already has in place, more than a dozen concerned parents and citizens aired their questions and concerns.

Control of access to the junior high and high schools was the prevailing concern of parents who attended the meeting.

“Coming from a [Austin area] school district that had very secure campuses to [La Vernia] was really eye-opening,” stated Jeff Freitag. “When my wife and I toured the middle school … just noticing that we were able to walk freely around campus … it was concerning to me.”

Sandra Garcia, whose son attends La Vernia Junior High School, had similar concerns. “I just walked into the cafeteria!” she shared. “[My kids] always felt safe at the primary school, but … at the junior high and high school, anyone can walk in.”

“Nothing we do with safety and security in La Vernia ISD is taken lightly,” Cone said. “Decisions are not made by one person.

There is a whole group of people that meet every year, multiple times a year, to review the things we’re doing and make suggestions for changes. They’re constantly collaborating on the safety of our kids.”

Cone assured parents and citizens last week that he will be bringing all their concerns and input to the June 23 Summer La Vernia ISD Safety Community/Alliance meeting.