Umpire takes action for the win! 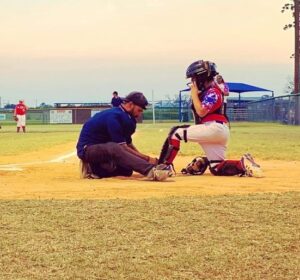 More often than not, we get upset with baseball umpires for their calls, but La Vernia-area umpire Nathan Garza definitely gets the win with his thoughtfulness and kind action, stopping to tie a New Braunfels Little League catcher’s shoes during a Little League 8U game. Nathan has been a “Blue” — baseball slang for an umpire, due to the color of their uniform — for eight years. It’s tournament season for many Little Leaguers, and Texas District 31 District Administrator Joe L. Patterson Sr. encourages everyone to remember the tournaments are for the kids, and to “allow the umpires, managers, and tournament officials to do their jobs. We are all volunteers and only want what’s best for our children.” Nathan’s kind actions exemplify this!