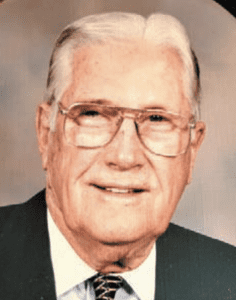 Weldon “Don” Vorpahl was born April 2, 1922, in the front parlor of his family home on Main Street in La Vernia, Texas, to Paul and Erika Lenz Vorpahl. As a young child, Don helped his father and brothers work in the Red and White store. He attended school in La Vernia, where he was a member of the high school’s first football team and excelled in track and field. After graduating from LVHS in 1939, he went to Texas A & I College in Kingsville.

Don immediately enlisted in the U.S. Army Air Corps after the devastation of Pearl Harbor. During the war he was a Navigator on a B24 Liberator. While performing a training exercise, an engine on the bomber caught fire. He and five other airmen were able to parachute to safety, making them official members of the Caterpillar Club. Don was then stationed on the West Coast as a Navigator instructor. He was honorably discharged from service as a Captain in the Army Air Corps September of 1946. He was extremely proud to have served his country, and flew the United States flag every day!
Don arrived in Las Vegas, Nev., with his wife Barbara in 1952, to raise his family in a young growing town. He worked for several different realtors before starting his own company, Don L Realty, in 1964. In 1966, he opened Caesar’s Palace as a slot shift manager on the graveyard shift. He figured he could still sell real estate and enjoy a good round of golf during the day! He moved on to the MGM in December of 1973. After the fire of 1980 at the MGM (now Bally’s), he moved to the Tropicana as a slot shift manager, where he retired from in 1987.

Retirement afforded him the opportunity to return to La Vernia on extended vacations, where he loved working with his brother Gene on the family farm. Don enjoyed the hard labor involved in using the grubbing hoe axe and chainsaw on the annual chores of cleaning mesquite and cacti away from the fence line, as well as things like feeding the cattle and helping pull a calf. After the farms were sold, he still visited yearly. A trip would not be complete without a delicious meal at Witte’s Barbecue, where he enjoyed seeing Jeff and Elsie, and visited with his good friends, Steve and Sue Austin and Will Rose. He would always make time for Sunday service at La Vernia United Methodist Church, where the Vorpahl brothers donated the American flagpole. He also enjoyed visiting the La Vernia Veterans Memorial and the La Vernia Heritage Museum, where he was a founding lifetime member. Weldon and his brother, Gene, are recognized with a memorial bench at the Veterans Memorial.

Don enjoyed spending time with his daughter, Jennifer, and grandkids Dustin and Alyssa and her husband Doug, and great-grandson Zane, all of Colorado. He also enjoyed spending time with his son, John, daughter-in-law Kathy, and granddaughter Kimberlee, all of Las Vegas, and his grandson, Kyle, who currently works in the Bahamas. A good day on the deck of the family cabin in Utah watching the hummingbirds put on a show just for him was another favorite pastime.

The family, including the extended family in Texas, will truly miss this wonderful man, said his family.

He was preceded in death by his parents, Paul and Erika Lenz Vorpahl; and his brothers, Alvin and Eugene Vorpahl.

A celebration of Don’s life will be held on Saturday, April 2, in the Finch Funeral Chapel in La Vernia.

Thanks to all for being his friend! He truly loved everyone, said his family.